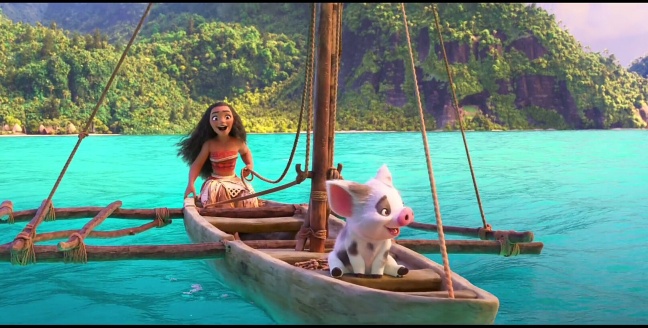 Welcome to Symbolism Saturday! For anyone new to Symbolism Saturday, this is a bi-monthly Saturday special that I originally started sharing on Instagram and Twitter. In these posts, I highlight an example of symbolism in pop culture in a bite-sized exploration. Today, we’re taking a look at a symbol from Disney’s Moana.

What is Symbolism, You Ask?

In a nutshell, symbolism is a literary device where the author of a creative work (like books, video games, and cartoons) uses an object (like a bird, necklace, color, or, occasionally, person) to represent a complex or abstract feeling or idea (like peace, loneliness, death, or, occasionally, a person). If you want to know more, I have a post taking an in-depth look at symbolism and Over the Garden Wall.

Symbols can carry more than one meaning, and Moana’s canoe is heaped with them.

First of all, the canoe represents strength. Sure, it takes literal strength to be able to paddle it through the water, but it’s more emotional strength that I’m talking about here. The water craft empowers Moana, giving her a way to get off of her island against her father’s wishes. It helps her find the strength to take on her destiny alone and without the support of her family (except for her grandmother). Without it, she would not have been able to leave. In this way, the canoe also represents Moana’s destiny. She knows it is her destiny to sail, and the canoe allows her to do so. It is also mentioned several times in the film that it is the destiny of her people to travel from island to island as their ancestors once did.

Speaking of ancestors, the canoe also represents the heritage of Moana’s people. Their ancestors sailed from place to place before they locked their watercraft away to protect themselves. These voyages were an essential part of their culture that they had to abandon in favor of safety when the ocean became more dangerous in the wake of Maui’s theft of Tefiti’s heart. When the canoe that takes Moana on her journey makes its appearance, she learns about and feels connected to her ancestors.

Throughout the film, the canoe also represents freedom. For Moana’s ancestors, they offer them the freedom to move from island to island. For Moana, the canoe allows her to freely follow her destiny and grants her the freedom to be on the ocean that she has craved since childhood. Even Maui finds freedom in the canoe. Before the ocean and Moana coerce him into assisting their quest, the canoe offers him a way to escape from the island he has been marooned on.

Finally, as a general symbol, boats and other water craft represent a journey. In this film, the canoe represents Moana and Maui’s journey to return the Heart of Tefiti, as well as representing the journey of Moana’s ancestors as they traveled from place to place.

Few! Given all of this symbolism, it makes moments when the canoe is damaged or lost even more significant!

If you enjoyed this Symbolism Saturday post, be sure to stop by for a new one every other Saturday. Do you have a favorite example of symbolism in pop culture? Be sure to share it in the comments! You can also connect on Twitter at @Popliterary, or send a message on the “contact me” page.

I'm a bit behind on my monthly bookstack drawings. Here are the books I read in July, minus picture books, comic issues, and magazines. I think Dear Data was one of my favorite July reads.
Throwback to last September when an audiobook had weird overlap with real life.
❓if you've ever had to come out, who were you most concerned to come out to? Or, name a nonfiction book about trans experiences!
❓Where was your most recent camping trip or where is a place you'd love to go camping? I would love to go bike packing across Japan!