Think about the last time you used technology. In fact, you’re using technology right now to read this post! We use technology for almost everything– communication, navigation, entertainment, to enhance our hobbies, health… the list goes on and on! It’s almost impossible not to.

Our interwoven relationship with technology is largely due to how useful it is. We can use it for things like homework, research, habit tracking, or anxiety mitigation fairly easily. Although there is a notable technology gap due to factors like financial well-being, ability, geographic location, or age, technology is largely all around us. It does have some problematic elements, and has great potential for harm, but this technology also has great potential for good. Today, I wanted to take a look at some of the everyday positive aspects of our technology showcased in the anime Laid-Back Camp (ゆるキャン△ Yurukyan).

Every month, I join the voices of the Otaku Warriors for Liberty and Self-respect (OWLS) blogging project. The OWLS bloggers and vloggers use anime and other pop culture works to discuss a central theme promoting diversity, respect, self-acceptance, and equality. I feel proud to work with the OWLS team, so keep an eye out for future posts exploring important social issues. If you’re interested in these topics, be sure to check out the other OWLS posts coming out with this blog tour, or consider becoming an OWLS blogger or vlogger yourself! 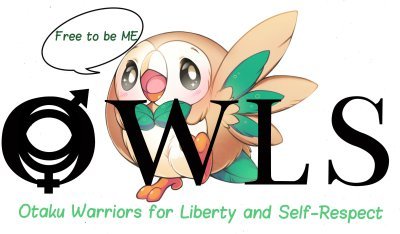 For July, the OWLS are taking a look at technology in pop culture. In a world of internet, smartphones, space exploration, robotics, and others, we recognize that technology plays a major role in the lives of many people. One of its major roles is as a mediator for communication. Although it’s true that technology has the potential to be harmful to social relationships, it also has the ability to connect us in unique and meaningful ways.

Laid-Back Camp is a charming slice of life (most likely in the sub-genre iyashikei) anime that follows the adventures of four high school girls, Rin Shima, Nadeshiko Kagamihara, Aoi Inuyama, and Chiaki Oogaki (with occasional appearances of Ena Saitou) who fall in love with winter camping. Their developing friendships are largely related to this shared hobby. 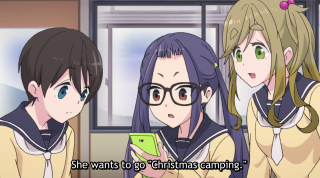 Mobile technology plays a role in their relationships and in the adventures that they go on. The girls frequently use their smart phones to text each other about future camping adventures. They also message one another about current adventures, or about new gear that they’re considering or using.

One of my favorite uses of smartphone technology is when characters use it to share their adventures with friends who are not present with them. When Nadeshiko is out and about, for example, she occasionally sends her friends photos of things she encounters. She does this whether she’s camping or just out walking around town. Her photos typically include captions explaining the scene to her friends and giving them small windows into what her day looks like.

For most of this miniseries, Rin prefers camping solo, while Nadeshiko joins a camping club called the Out Club with Aoi and Chiaki for group camping adventures. Rin and Nadeshiko message each other about their camping journeys as often as possible, and occasionally do so while camping at the same time in different locations. During one particular camping trip, Nadeshiko sends Rin a photo of the nighttime scenery from their camp so that she can see the amazing setting her friends found. Rin reciprocates with a shot of her own camping location. The pair are clearly delighted to be able to share such beautiful scenery with one another even though they are not camping together. 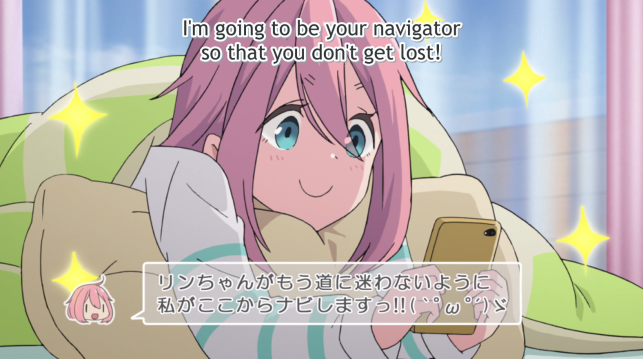 In the episode A Night of Navigator Nadeshiko and Hot Spring Steam, Nadeshiko and Rin use their phones to camp together remotely. In the beginning of the episode, Rin and Nadeshiko have plans to camp together, but Nadeshiko comes down with a cold and has to stay home. Rin goes camping alone, and invites Nadeshiko to be her navigator and tour guide. Delighted that she can share in the camping adventure from home, Nadeshiko sets out to track down all of the best tourist ventures for her friend, including a mushroom kingdom and a shrine that honors a hero dog. Chiaki has an opportunity to drop in on the navigation as well. The adventure seems entirely fulfilling to everyone involved, with technology mediating an amazing adventure for everyone to share when they can’t all be together.

A Shout-Out to a Different Sort of Technology

Although it is not digital, there is another notable technology at play in Laid-Back Camp that contributes to these heartfelt camping adventures: camping gear. I grew up backpacking and llama packing with my family, so I’ve always had an appreciation for improvements in caping gear technology. I’ve enjoyed watching as gear has steadily become lighter, more multi-functional, more compact, and warmer over the years.

Out of the four (and sometimes five) protagonists, Rin has the highest quality gear, received mostly from her grandfather. Her gear is all light-weight and compact enough to fit on the back of her scooter, allowing her to solo camp wherever she wants within the capabilities of her two-wheeled ride. 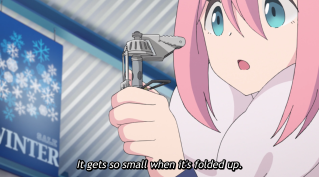 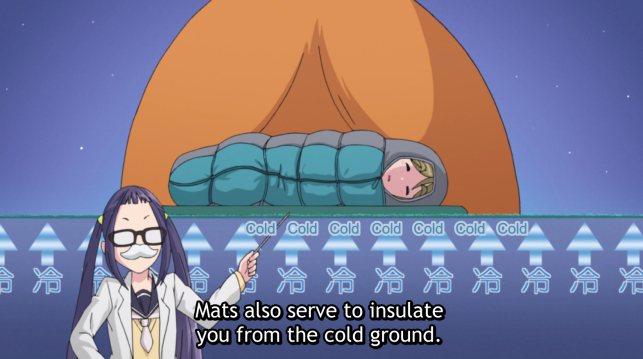 The girls of Laid-Back Camp don’t have the resources for top-notch gear, but they explore what gear options are out there and learn what features to look for in lower-cost alternatives. Some of the episodes include short informational narration blurbs describing different types of camping gear. At one point during their gear studies, the Out Club ventures to an enviable outdoor gear store where they explore the lightweight, compact technology that benefits so many camping enthusiasts.

Do you have a favorite example of how we use technology from pop culture? Share it in the comments! You can also connect on Twitter @Popliterary, or send a message on the “contact” page. And as always, if you have a literary device or grammar rule you want to know more about, or a game, comic, show, or movie that you want to see make an appearance on the blog, leave a shout-out in the comments!

This month, the OWLS bloggers are taking a look at vulnerability in honor of Pride month. I'm excited to talk about the vulnerabilities shared between Frances and Prince Sebastian in The Prince and the Dressmaker. Come check it out! (link in profile). #LGBT #LGBTQ #Pridemonth #LGBTPride #LGBTQPride #LGBTliterature #comic #ThePrinceandtheDressmaker #JenWang #LGBTLit #vulnerability #comictheme #comicsymbolism #symbolism #theme #OWLSbloggers
It’s Symbolism Saturday! We’ve taken a look at a few symbols that have meaning within a specific story, and today we are taking a look at another one! This symbol comes from Rokuhoudou Yotsuiro Biyori. (SPOILERS AHEAD) The set of tea cups that Sui keeps despite one being broken are representative of his and his brother’s relationship. Sui, who is willing to keep the door to their relationship open, is represented by the whole cup (his cup). His brother, who has closed the door on their relationship, is represented by his own broken cup. Sui keeps the cups because he believes that their relationship is worth rekindling if the chance should ever arise. When he has the cup repaired for New Year’s, the gesture represents the fixing of their relationship, though the repaired cup will never be what it was before. Likewise, their relationship will never be what it was before. (Oh man! I just realized that their clothing matches the color of the cups, but their colors are switched! Does this mean that the broken cup actually represents Sui? You decide!) #symbolism #literarysymbolism #symbolismsaturday #popculturesymbolism #enlgishlanguagearts #englishclasshelp #animesymbolism #rokuhoudou #rokuhoudouyotsuirobiyori
It’s Symbolism Saturday! We’ve taken a look at symbols from Tangled before, but that film keeps offering them up! The lanterns that Rapunzel sees on her birthday take on a few different symbols in the movie. For her family and the rest of the kingdom, they represent the lost princess. For Rapunzel herself, they symbolize hope and freedom. She sees them and longs to be where they are, hoping that someday she will be free from her tower and have a chance to see the lights. The hope of seeing the lights sustains her and keeps her moving enthusiastically forward throughout the film. (The lanterns also symbolize the king and queen’s hopes that their daughter will return to them safely) #symbolism #literarysymbolism #symbolismsaturday #popculturesymbolism #enlgishlanguagearts #englishclasshelp #cartoonsymbolism #popculturesymbolism #tangled #disneysymbolism #hopesymbolism
It’s Symbolism Saturday! Caves often carry a number of meanings, including security, the search for life’s meaning, and space for meeting deities. These symbolic meanings breath new significance into the Cave of Two Lovers from Avatar: The Last Airbender. The Cave of Two Lovers is a legendary meeting place where two star-crossed lovers from warring villages regularly met. The cave provided them with a secure space to meet in where they were safe. In the legend, the lovers encountered badgermoles in the cave and learned earthbending as a result. Meeting the badgermoles is a lot like the idea of a cave being a place to meet deities, who often bestow the seeker with magical powers, worldly knowledge, or sacred objects that will allow them to complete their quests. In the present day of the Avatar series, the protagonists find themselves lost in the cave’s network of tunnels. They are unable to find their way out until they either meet with the cave’s deities (Sokka’s group has this honor), or allow love to lead the way (possibly connected to the search for the meaning of life). #symbolism #literarysymbolism #symbolismsaturday #popculturesymbolism #enlgishlanguagearts #englishclasshelp #cartoonsymbolism #popculturesymbolism #avatar #avatarthelastairbender #cavesymbolism #secrettunnel #caveoftwolovers