Pop culture acts a platform for self-expression and provides a space for the LGBTQ+ community to find visibility. There are a number of pop culture works that include and revolve around LGBTQ+ characters. A number of these works focus on overcoming hate and discrimination, raising awareness for what individuals in the community experience in the real world. But what about those works that dare to envision a world where hate doesn’t exist at all? A few notable works to consider are Boy Meets Boy, Welcome to Night Vale, and Steven Universe, works whose creators all envisioned worlds without hate where LGBTQ+ characters face incredible problems without a central focus on discrimination.

Every month, I join the voices of the Otaku Warriors for Liberty and Self-respect (OWLS) blogging project. The OWLS bloggers and vloggers use anime and other media to discuss a central theme promoting diversity, respect, self-acceptance, and equality. I feel proud to work with the OWLS team, so keep an eye out for future posts exploring important social issues. If you’re interested in these topics, be sure to check out the other OWLS blogs for each tour, or consider becoming an OWLS blogger or vlogger yourself!

June is LGBTQ+ pride month, and in honor of equality, inclusion, and visibility, we’re talking about “pride“ in pop culture. Our bloggers are taking a look at moments and skills that showcase moments of pride and joy for the characters involved. We are also looking at whether or not these skills and moments can be interpreted as positive or negative for the individual or for the surrounding society.

If you missed it, Crimson of My Fujoshi Life was the “pride” stop before me. Give it a read if you’re interested in this month’s theme.

I’m taking our prompt in a slightly different direction for this post. Instead of focusing on the accomplishments or abilities of particular characters, I’m taking a look at the accomplishments and visions of a few pop-culture creators: David Levithan, Joseph Fink & Jeffrey Cranor, and Rebecca Sugar. Each of these creators is responsible for creating pop culture works that represent LGBTQ+ characters in fictional contexts that don’t explore overcoming discrimination as a primary story element. In fact, their works seem to take place in worlds without hate.

A few years ago, I took a course on young adult literature as part of my coursework. The course had us read Boy Meets Boy by David Levithan. The book is a romantic-comedy about a high school boy in love trying to win back the boy who’s captured his heart. Something that stood out to me about the book was that Levithan chose to focus on the characters and their average teenager worries without complicating them with secrecy and discrimination. Every LGBTQ+ character in the book is openly so, and nobody gives them any trouble for it. In fact, the characters never fear discrimination or hate. 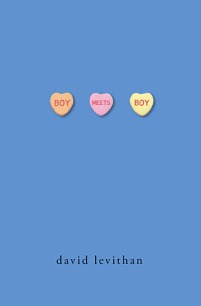 During our class discussion of the book, several students expressed concerns about the lack of discrimination in the book. They argued that the experiences of these characters aren’t accurate to, and don’t represent, the experiences of the LGBTQ+ community. For this reason, they worried, the characters and their experiences may not resonate with LGBTQ+ readers. I’ve seen similar arguments in reviews shared by users on Goodreads. In some ways, these concerns make sense. When it comes to literature, especially young adult literature, readers are often looking for characters and stories that represent their own experiences. This is especially true when it comes to marginalized communities.

After listening to my classmates’ concerns about Boy Meets Boy, I felt like they had some interesting points. However, I also felt that they also missed some important points about LGBTQ+ literature and, by extension, pop culture. I don’t feel like every work of fiction has to accurately represent the real world. They just need to represent people. Such works raise visibility for the LGBTQ+ community, creating creative spaces where queer people are represented in some way.

I know of a number of fictional works that increase visibility and are set in the same sort of ideal world as Boy Meets Boy. One prominent example is Welcome to Night Vale, a podcast from Joseph Fink and Jeffory Cranor. Like Levithan, Fink and Cranor envisioned a world for their podcast in which there is no discrimination against LGBTQ+ people. Their podcast features several LGBTQ+ characters, including a central character and his boyfriend, and a gender-neutral law-enforcement character. Throughout the series, these characters are just able to exist as people without their major conflict being overcoming discrimination.

It is important for us to see works in which characters experience and overcome hate. These kinds of stories can be uplifting, and at the very least represent the real struggles of LGBTQ+ people. However, queer characters shouldn’t only exist for the purpose of showcasing and overcoming discrimination. They should be allowed to simply be characters who experience the same kinds of conflicts as any other characters. Sometimes, it’s just nice to escape to worlds where LGBTQ+ people don’t face discrimination and are simply allowed to exist. Levithan, Cranor, and Fink are creating such worlds in their works. They are using their skills as writers and visionaries to offer audiences new worlds and to increase queer visibility in their own way.

Another concern expressed by my classmates was that in representing an ideal and hate-free world, Levithan risks downplaying and invalidating the very real struggles and experiences of LGBTQ+ individuals. Fiction that includes discrimination and hate as part of its conflict highlights real-world concerns. Works of this sort show that everything is not all sunshine and rainbows and emphasize a need for change. Works set in ideal worlds can’t quite accomplish the same thing.

Just like their other concern, this one does have merit, but once again, I feel that my classmates were only looking at the book from one angle. Not every LGBTQ+ work needs to include discrimination as the main conflict, and they don’t necessarily need to represent discrimination in the context of anti-LGBTQ+ sentiments for the message to come across.

There are some fictional works that envision worlds like that of Levithan’s envisioning, but use different types of discrimination to explore this real-world problem. One notable example that offers us a hate-free world for LGBTQ+ individuals is Rebecca Sugar’s Steven Universe. Sugar’s world is full of different types of discrimination, but nobody blinks an eye at the notion of two women falling in love, or at the notion of using gender-neutral pronouns to describe the gender-neutral fusion Stevonnie. However, unlike Levithan’s book or Fink and Crannor’s podcast, Sugar’s work does parallel real-world discrimination.

Steven Universe takes place in a world where there is a race of people called gems, who are made from gemstones. Gems are all female, and have some unique abilities. The most relevant to the current discussion is their ability to fuse with one another. On their Homeworld, gems treat fusion as a utility, and it only occurs between gems of the same type. For example, Rubies can fuse with other Rubies. Gems of different types can fuse, but it’s highly frowned upon on Homeworld. The first time that the audience learns about this convention comes in the form of a story about two gems of different types who fell in love and fused by accident. The other Homeworld gems were shocked and appalled at the display, and the new fusion had to escape or be killed. From that point on, this fusion and all fusions like her are treated with disgust and condescension by the Homeworld gems. 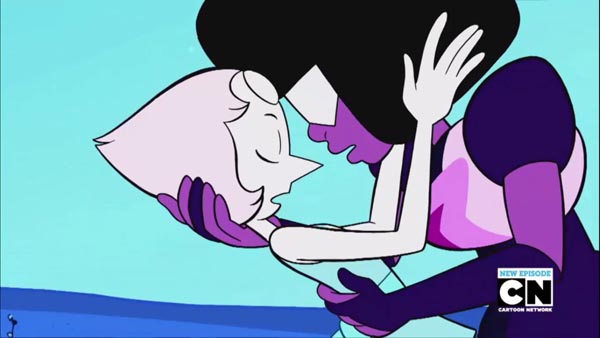 Visibility in pop culture can take many forms, and audience members interpret it differently from person to person. What causes one person to fall in love with a particular LGBTQ+ work of pop culture might not resonate well with another audience member. That’s part of the beauty of pop culture: it’s highly versatile and wiggles in to fit the needs of audience members all over the board. Whether a pop culture work represents LGBTQ+ characters fighting hard to overcome hate or creates a space for them to just be their own flavor of queer, these works of fiction that capture our hearts and imaginations are doing the important work of raising visibility for the community.

Thank you for exploring “pride” with me today. Next up on June’s blog tour is Mat Doyle Media, writing about The X-Files. Be sure to check it out!

Do you have any favorite examples of LGBTQ+ visibility in pop culture? Share them in the comments! You can also connect on Twitter at @Popliterary, or send a message on the “contact” page. And as always, if you have a literary device or grammar rule you want to know more about, or a game, comic, show, or movie that you want to see make an appearance on the blog, leave a shout-out in the comments!

It's almost #PrideMonth, so I figured I would share this year's #LGBTQBookBingo card in case anyone who isn't currently participating wants to do a fun queer bingo in June! This bingo is year-long, but feel free to just do it for June! (It's also on #TheStoryGraph)
I decided that my The Brilliant Death jar will hold looseleaf tea alongside one of @rainbowcratebookbox 's lovely tea tins from another month. I enjoyed this book, and the design on this jar is lovely!
Bookmarks allow us to put a pause on whatever story we're immersed in so that we can step into and out of our lives seamlessly. The metal bookmark from the March @rainbowcratebookbox is charming, and packed full of reading suggestions! (granted, I need a magnefying glass to read it and my eyes aren't too bad) There's something satisfying about placing the weight of a metal bookmark into your most recent pause.
I wanted to show off the March magnet from @rainbowcratebookbox ! So far, this is one of my favorite of their magnets (and I haven't read this book). I love the sparkly semi-transparent edges of it quite a lot.