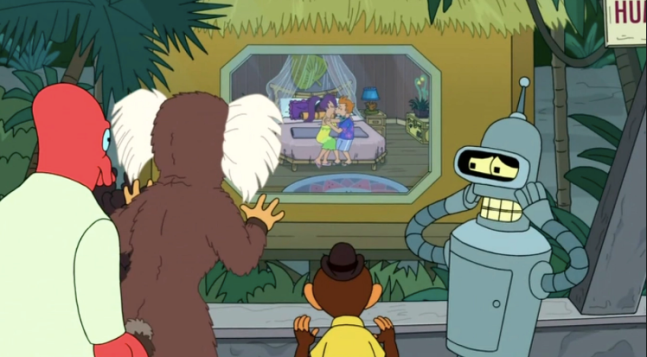 Well, somehow I survived the end of my busy semester and am excited to launch back into blogging over the summer. Today’s post is a little off schedule because I missed Friday, but next Friday is my OWLS post for our “movement” tour, and I wanted my first post after the dramatic pause to be a literary one. After next week, I’ll be back to posting every other Friday again. Thanks for your patience!

As the audience, you don’t have to understand the literary devices and narrative techniques that creators and authors use to enhance their stories. However, knowing about them helps to give you an even deeper appreciation for the shows, games, and stories you love. Recently, we took a look at verbal and situational irony in Futurama. Today, Futurama returns for another foray into a third type of irony: dramatic irony.

Use some caution if you’ve never watched and plan to watch Futurama. This post contains light spoilers for certain episodes.

Now that you’re used to thinking of irony as the opposite of reality (kind of), stick a pin in that. Dramatic irony throws this rule out the window. Dramatic irony  creates the kinds of moments that cause you to start yelling at the characters on the screen to stop what they’re doing right away. It refers to situations where the audience has information that one or more characters do not. This information is likely rather important for them to know, and knowing it would really save them a lot of trouble later (or, in some unfortunate cases, literally save their life).

The Futurama scene shown in the first image of this post offers an excellent example of dramatic irony. In the episode “Fry and Leela’s Big Fling,” Fry and Leela go on a romantic retreat to a tropical resort that is supposed to be just the two of them for a whole weekend. What they don’t know, and the audience eventually learns, is that they are not as alone as they think. As it turns out, the romantic retreat is actually a human mating exhibit housed within a zoo on a primate planet! This becomes a moment of dramatic irony because Fry and Leela are never made aware of the situation while the audience knows all about it.

Other Futurama episodes also offer examples of this literary device. Looking again at the episode”The Devil’s Hands are Idle Playthings,” we see a great example of dramatic irony during Fry’s opera. Fry pours his heart into a beautiful opera for Leela, all the while believing that she hears him and understands his feelings. What Fry doesn’t know, but Leela and the whole real-world audience does, is that Leela can’t hear his opera. She’s deaf thanks to Bender and the Robot Devil. This is an example of dramatic irony that doesn’t end up having dire consequences for the characters.

To give an example of dramatic irony with dire consequences, think about Romeo and Juliet (I know, this one’s classic literature, not pop culture, but bare with me!). In the end of the play (um… spoilers, I guess?), Juliet escapes her problems by purposefully entering a deep sleep resembling death. Unfortunately, her suitor, Romeo, finds her in this state and believes she is actually dead. While Juliet and the audience know that she isn’t dead, they can’t exactly tell Romeo this information. The dire consequence is that Romeo, believing he has nothing left to live for, poisons himself in order to join Juliet in whatever afterlife awaits them. If only the audience could have told him that she was sleeping!

A storyteller might use dramatic irony for a number of different reasons, but one of the more common ones is to heighten the emotional experience of the audience. For example, dramatic irony can create tension or humor. Think back to the Futurama episode with Fry and Leela in the exhibit. This situation is meant to be funny to the audience because they know that Fry and Leela’s drama and romance is on display to a whole planet without them knowing. Similarly, in Romeo and Juliet, the audience experiences tension when Romeo believes Juliet is dead because they know she is not.

What if I’m Just Really Good at Predicting Every Plot Ever?

Remember that the key part that makes these two scenes dramatic irony is that the audience has been given information that one or more characters do not have. Moments where the audience can guess important information but might not know for sure aren’t necessarily examples of dramatic irony (they may be due to foreshadowing, which is a topic for another day). 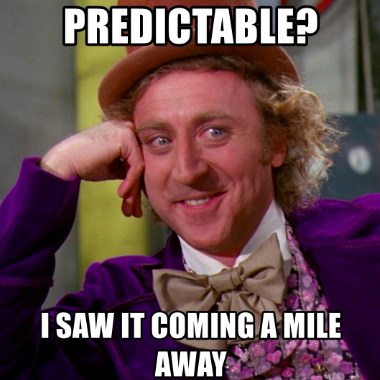 To give an example of a situation that is not dramatic irony, imagine watching a horror movie or playing a horror game. A teenage boy with a bad attitude splits off from the rest of the group. The audience knows that this teenager is about to become one of the first victims because they have probably seen this trope before. They know that the teenager is doomed.

This is not a case of dramatic irony. Sure, the audience has an expectation that the young man will be killed by something, but they don’t technically have information that the characters don’t (other than a meta-understanding of the genre, but let’s not break the fourth wall!).

Do you have a favorite example of dramatic irony from pop culture? Share it in the comments! You can also connect on Twitter at @Popliterary, or send a message on the “contact me” page.

Bonus! If you’re looking for other resources to help you gain a stronger understanding of the different types of irony, I’d like to point you in the direction of a clever irony infographic by The Oatmeal.

Juneteenth commemorates the day, over 2 years after the Emancipation Proclimation was signed, when the last enslaved black people were freed in the United States. Today is a day to commemorate the hard-won freedoms and rights black people should never have had to fight for, and it is a day to remember how far we still need to go. The fight is not over.
The gist 📚: A tornado picks Dorothy up and drops her in a magical land called Oz. She must find a way to get home to Kansas, and makes several quirky friends along the way.
The gist 📚: Marisol and her sister Gabi have come to the US as refugees to escape gang violence back home. When restrictive boarder practices threaten to send them home, Marisol agrees to become part of a medical experiment in order to have their asylum request heard. The experiment seeks to try a new medical technology designed to transfer grief and trauma from someone experiencing them to someone else as a sort of temporary holding tank of sorts. Marisol is paired with a girl her age who recently lost a sibling in a traumatic way.
Happy pride month! ❤️🧡💛💚💙💜 This month, we celebrate us and each other, and support one another through visibility.