The pop culture figure known as Baby New Year may have been popularized by a series of amusing images released by The Saturday Evening Post in the early 1900s. The images, released for New Year’s, featured chubby babies with the new year printed behind them. The Post wasn’t the first to come up with the idea, however. According to The Encyclopedia Britannica, the idea of Baby New Year can be traced back to Greek times, as the Greeks used the image of an elderly man to represent the old year, and a baby to represent the new one.

It’s amazing how different creators draw on the works of others in order to create new content that, in itself, influences the people who come across it. Bloggers often follow similar trends. Whether you enjoy writing about your favorite fandoms or draw inspiration from other writers, the posts you create are original works that may influence your readers as well.

Welcome to a special week-long New Year’s celebration celebrating YOU! This week, I’m sharing a year of my favorite blog posts written by the WordPress community in order to recognize your contributions to the wonderful blogosphere that we are all part of. If you missed Day 1, be sure to check it out (Day 1 contains a more thorough explanation of this festive special)! You can also check out Day 2 for more of these amazing blog posts.

Today, we’re taking a look at blogs from April and May. Keep an eye out for more posts throughout the week. I hope that you enjoy reading these as much as I did! 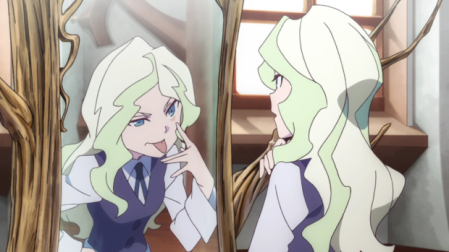 1. Part of what makes a story special is the way that the characters’ personalities compliment or contrast with one another to enhance the narrative. In Becoming Diana Cavendish— Perception and Visual Framing in Little Witch Academia, Atelier Emily discusses Little Witch Academia‘s Diana Cavendish as the foil (a foil character is one who contrasts with another character) for protagonist Akko Kagari. This lovely post also focuses on the ways that animation decisions in the series serve to highlight Diana’s privilege and isolation from other characters. (If you enjoy this post, I also highly recommend A Vertical Society — Cinematography and Visual Clues in Made in Abyss Episode 1)

2. One thing that I love about Rai’s Anime Blog is the emphasis that Rai puts into exploring the Yuri genre. Her post Yuri Anime and Manga: Validating Lesbian Relationships as Real (June OWLS Blog Tour) offers a great example that explores an important aspect of Yuri anime: offering pop culture content that validates lesbian relationships in ways that other narratives don’t. Along the way, Rai’s post also discusses harmful stereotypes that often appear in Yuri. (For another great post by Rai, check out Would Yuri and Viktor’s Relationship be Accepted in Their Own Countries? Homosexuality in Japan and Russia (OWLS February Blog Tour)).

3. Coincidentally, my third pick for April comes from another blogger who also does an excellent job of providing blog content focused on the Yuri genre. Zeria of Floating Into Bliss offers thoughtful blogs on a wide range of topics. Zeria’s April post Why Spoilers Don’t Matter and Hurt the Anime Community offers a positive perspective on the idea of spoilers. The post argues that some spoilers are intriguing, and that bloggers shouldn’t dilute their content for the sake of avoiding any possible spoilers. (Two other excellent pieces from Zeria include Yuri isn’t Made for Men: An Analysis of the Demographics of Yuri Mangaka and Fans, and Iyashikei: The Genre of Healing– An Attempt at a Definition).

You all made my choice for May especially difficult to figure out. I can’t believe how many amazing posts you all put out that month!

1. Hundstrasse’s The Unexplained Setting unpacks a nostalgia for childhood experiences with text RPGs. The post expands on how these games inspired a sense of wondering why you’re in a particular setting, and connects this question to today’s games such as Portal.

2. Our world is full of so many incredible places to explore, from the well-known to the rarely referenced. Videogames too offer us incredible places to explore (which may be more accessible to many people due to their digital nature). Wakalapi, an avid gamer, shares an amazingly fun experience of exploring a place called Fort Worden in Fort Worden: Probably Why I Love Exploration Games so Much. The post is full of photos from the historic location, a place that looks like it could easily inspire someone’s game design.

3. Somehow, my top three picks for May all relate to videogames. Children of the Earth: The Limits of Link and the Promise of Aloy from Feminist Frequency discusses two of the major open world titles that came out this year: The Legend of Zelda: Breath of the Wild, and Horizon Zero Dawn. This particular post explores the ways that each game empowers its female characters. Ultimately, it seems that HZD does a much better job of female empowerment than BotW. (If feminism in gaming interests you, I also recommend checking out Feminist Frequency‘s Gender Breakdown of Games Featured at E3 2017).

Do you have a favorite blog that you’ve written or read from April or May? I invite you to share it in the comments! I’m always excited to read new posts.

13 thoughts on “New Years Special: Reflecting on a Year of Your Blogs Part 3”

I made more progress on my year-long reading challenges in March. So far, I'm still letting my usual somewhat random book selection habits guide my progress in these challenges. I do have a Z book planned for the #2021AToZReadingChallenge, but that's the extent of my planning. No bingo yet for the #LGBTQBookBingo2021, but maybe April will be the month I get one of those!
Bill explores many topics, from climate change and the incredible design that went into the Mars rover's landing equipment to his start as an educational entertainer and changing one's mind about topics (like GMOs) when new evidence is presented. I thoroughly enjoyed this book both as a nerd and as a fan of Bill's work. It's also fun listening to the audiobook because Bill narrates it.
Today is the international transgender day of visibility. We celebrate trans and nonbinary people today, both those who can openly live themselves and those who cannot. Here is a collection of great books by trans authors!
In the face of the recent increase in hate crimes and discrimination against the AAPI community over the past year, here are 10 excellent queer AAPI authors to check out!