Nearly every holiday has some sort of festival celebrating a miracle that saved its practitioners in some way. Miracles such as these are almost always worth celebrating, and people generally like to celebrate. In honor of the many December holidays (not all revolving around miracles), we’re exploring eight examples of narrative miracles through the literary device Deus ex Machina. Make sure you check out the first night if you want to learn a little more about this literary device before diving into nights seven and eight.

After lighting the Menorah on night five, we explored one of my favorite feel-good-ending examples of Deus ex Machina in Gravity Falls. Now, grab your gelt and gather around the table for a back-to-back exploration of Rick & Morty and the My Little Pony comics.

The sixth episode of Rick & Morty season one, “Rick Potion Number Nine” offers an example of this literary device that is quite unique compared to the other examples explored so far. In many of the other examples, the Deus ex Machina in question is used as a one-time occurrence that never comes up again. Nobody ever mentions that one time magic pokemon tears brought Ash back to life, or the time that Sakura was saved by her mother’s ghost. In the case of movies and games, too, Deus ex Machina often occurs as a one-off occurrence that never comes up in sequels due to various narrative conventions. In the case of “Rick Potion Number Nine,” however, the situation becomes a major component of later episodes. (This section contains mild spoilers for Rick & Morty’s sixth episode, but they’re fairly harmless, given the nature of the show).

The episode starts out with Morty wanting to catch the attention of the girl he has a crush on at school. After much coercing, Rick throws together some kind of crazy love potion using the genetics of various animals that should make her fall madly in love with Morty. At first, Morty feels a little uncertain of the legitimacy of his grandfather’s science, but hormones speak more loudly than logic and he dashes off to use it at a school dance.

As is to be expected of any Rick & Morty episode, this experimental substance goes wildly wrong and Rick swoops in to rescue his grandson from the fallout of his experiment. While trying to fix his original mess, Rick uses a series of genetic cocktails that make the situation rapidly degenerate from bad to impossible to reverse. What results is the creation of a world in which all humans are reduced to mutated blobs of sentient flesh that can never be reverted to their original forms.

Having thoroughly “cronenberged up” the world (a reference to Canadian filmmaker, screenwriter, actor, and director David Cronenberg), Rick promises that his next experiment will fix everything. Instead of actually fixing it, however, Rick takes this opportunity to reveal to Morty that his dimension-hopping portal gun also allows him to travel to alternate versions of Earth.

With the push of a few buttons, Rick finds a reality in which he and Morty happened to have just died in a highly coincidental explosion. This particular explosion originates from a device that the episode’s original Rick and Morty had decided to not tinker with earlier in the episode in favor of taking on Morty’s hormone-driven request for a love potion. Taking full advantage of this extremely convenient coincidence, Rick and Morty abandon their own hopeless reality in favor of a new one. The coincidental nature of finding a reality in which they happened to die combined with Rick’s failure to mention alternate versions of identical Earths makes this situation Deus ex Machina.

As mentioned earlier, this event does play a big part in future episodes. It also helps to firmly establish that Rick can pull science-given Deus ex Machina out of his huge brain as needed. Let this example stand as a reminder that Deus ex Machina doesn’t always come at the end of a story, and it doesn’t have to be an isolated incident.

Readers of the My Little Pony: Friendship is Magic comic know that this series differs widely from the cartoon. Because of differences in its target audience, the comic often contains stories that attempt to tackle more emotionally intense content than the animated series can. It also regularly features noncanonical content that allows authors to freely create stories and concepts without regularly stopping to clear every decision with the original creators of the current series. (The following will contain spoilers for issues 17-20 of the comic).

Issues 17-20, which contain the ‘Reflections’ story arc, contain an example of Deus ex Machina. The story arc in question features a fun trope that plays a significant part in understanding the Deus ex Machina: the alternate universe. In the narrative, a famous wizard introduces the series’s princess to a parallel universe that mirrors their own. They visit this other world occasionally for research and conversations with the pleasantly non-evil counterpart of an evil king from their own world.

After a heartbreaking series of events that turns the princess’s sister evil in her own reality, the princess begins to frequent the parallel world secretly in order to hang out with the not-evil versions of her sister and the less-than-evil king of that world. Unfortunately, her frequent trips begin to cause consequences for her own world that eventually leads to their two worlds beginning to merge. 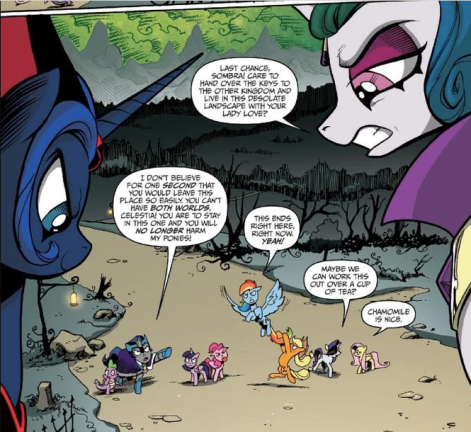 Somewhere along the timeline, the princess’s alternate self turns evil and runs wild. When their worlds begin to merge, the evil alternate-princess convinces her alternate not-evil sister to join her and proceeds to try and take over both worlds.

When the central protagonists try to fight the evil princess, they quickly learn that inflicting harm on her also hurts the good princess from their universe. Several failed ideas lead them to the tragic realization that in order to save both worlds, both princesses would need to be sacrificed. Or, that’s what it seems like will have to happen, until an amazing idea strikes the alternate universe’s king. He comes forth and proposes that he can pull evil magic out of the alternate princess and her sister, saving both worlds and the princesses from both realities.

Magic being the cause of the princess’s evil nature is never mentioned up to this point, nor is the king’s ability to pull magic out of people. That’s actually a pretty frightening power, if you think about it. Imagine being a magical being and suddenly having it all pulled out of your body! Good thing he was on the heroes’ side! Overall, pulling evil magic out of a princess to save the world isn’t a bad way to end a story.

Do you have a favorite example of Deus ex Machina in pop culture? Share it in the comments! You can also connect on Twitter at @Popliterary, or send a message on the “contact me” page.