One week remains of November. For those participating in this year’s National Novel Writing Month challenge, this final week is often a huge push as everyone tries to close out their November goals. Hopefully everyone is satisfied with their progress and finishes the month with a bang! At the very least, you should feel proud of yourself for making the effort to set type to page.

In solidarity with those of you taking on this challenge, we’re spending the month taking a look at pop culture narratives based on novels. Last week, we covered the popular TV crime drama, Bones, which came to a satisfying conclusion earlier this year. Today, we’re discussing a pop culture work that has been around since my own childhood, one which I never would never have guessed was based on a novel: The Brave Little Toaster. 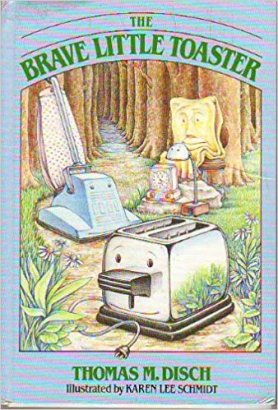 The 1987 film The Brave Little Toaster was based on a novella written by Thomas M. Disch titled The Brave Little Toaster: A Bedtime Story for Small Appliances, published in 1980. When he first approached publishers with his idea, they were reluctant to publish the story. In an interview with Strange Horizons, Disch states that the publishing companies believed that the notion of talking appliances was simply too farfetched for children to enjoy. Disch found their concerns to be ridiculous, considering the number of talking animal stories on the market. He persisted, and after publishing the story in  The Magazine of Fantasy and Science Fiction, he finally managed to get Doubleday to take up the publication through a five-novel contract that they had with him. By then, the film was already being worked on.

Disch was a skilled writer who produced both poetry and prose during his lifetime. His works include The Genocides (his first novel, published in 1965), The Dreams Our Stuff Is Made Of (winner of both the Hugo and Locus awards), and a sequel to The Brave Little Toaster, The Brave Little Toaster Goes to Mars, among other works. Disch was also part of the collaborative minds behind the 1987 text-adventure Amnesia released by Electronic Arts. He passed away in 2008, the result of suicide that may have been related to the passing of his partner of three decades, Charles Naylor, in 2005. Although Disch is gone, he lives on through his works.

The Death of a Flower

Near the end of my high school days, I decided to rewatch a few childhood favorites with my younger brother before I left for college. One of the films on the list was The Brave Little Toaster. I remembered it containing a large number of dark themes for a kid’s movie, and was intrigued to see how I felt about it as an adult. The darkest scene was the horrifying junkyard scene where broken down cars sing about their lives before being smashed down by a crusher. Thinking of this scene in particular, we decided to amuse ourselves by counting how many characters in the movie died. By the time we passed 20, the game stopped being funny.

One of the characters that I remember counting during our morbid game occurred toward the beginning of the movie. The appliances find themselves in a meadow, where they run into some trouble with the local wildlife and get separated. While trying to find the other appliances, Toaster stumbles upon a flower growing alone in a single ray of sunshine. Upon seeing its own reflection in the toaster’s shiny surface, the flower falls in love with its new false companion and tries to get the toaster to stay with it in the clearing. Toaster, feeling uncomfortable and needing to find the other appliances, brushes the flower off and retreats from the clearing. After losing its companion, the flower is seen wilting, seemingly unable to continue living after discovering how lonely it had been. The scene stood out to me due to the symbolism of a flower (often symbolic of innocence) dying after falling in love (with itself?).

I was surprised to learn that this same flower shows up in the novel. In the book, it is a daisy that speaks in verse. When she sees herself in Toaster’s reflection, she imagines the reflection is a male flower and falls in love. I haven’t read the novel myself, so I don’t know if this scene ends with the flower’s death.

A notable difference between the book and the movie revolves around gender. In film, it is often difficult to create characters with no genders due to voice acting. Voice actors typically have distinctly gendered voices, and the characters they voice often take on those genders even if the connection is unintended. The same goes for the Brave Little Toaster film. The appliances have distinct genders and pronouns in the film due to the constraints of voice acting.

The novel is not limited by these same constraints. The appliances have no genders in the novel. This is highlighted by a scene that doesn’t make it into the film in its entirety. Fans of the film might remember a scene where Blanket is blown away from the group by a terrible storm after setting up as their tent for the night. After an exhausting night, the appliances find Blanket in a tree and work together to bring him back down. The scene plays out a bit differently in the novel.

When Blanket blows away in the storm, it is a pair of squirrels that find it named Harold and Marjorie. The squirrels help rescue Blanket, and get a chance to meet the rest of the appliances as well. Upon discovering that the appliances have no gender, the squirrels are baffled by the concept. A discussion about having no gender is an interesting concept to find in a kid’s book from the 80’s, but it is not a surprise for Disch’s works. The Poetry Foundation notes that Disch’s work was often known for containing “gender-bending conceits”.

Surprising Moments from the Film

As with any film adaptation of a print-based work, the novel and movie differ significantly from one another. The basic plot, however, is relatively the same: the appliances find themselves separated from their Master and set out to find him so that they can continue to serve him. Their adventures take many twists and turns along the way. I don’t know about the book, but the film offers many startling moments that you won’t find in children’s movies today. Here are a few of my favorites:

Aneurysm. In the beginning of the film, the appliances get into an argument with a grumpy old air conditioner. The oldtimer tells the appliances that they shouldn’t try to find the Master, and continues to berate them with unnecessarily unkind words. When they stand up to the AC-unit, it flies into a rage that causes it to overheat and explode. The appliances feel bad for the now dead unit, but move on with their journey. 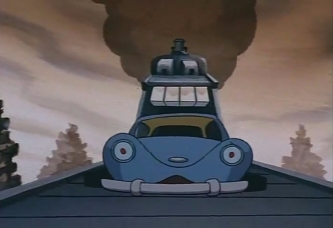 The Junkyard scene. This is perhaps one of the most memorable scenes in the film due to its terrifying and dark nature. As mentioned earlier, this scene takes place in a junkyard and features a number of cars singing about their amazing lives before being crushed to death by a scrap machine (you get to watch them as they are crushed). The vehicles all know what is coming, and an unlucky few of them located close to the scrap machine find themselves constantly sprayed by the crushed remnants of their fellow anthropomorphic automobiles. To add darkness to the scene, the cars also sing about how worthless they are. Looking back, I feel like this scene was where a significant portion of my brother’s and my death list came from.

Boobs. I don’t know why I noticed this image the last time that I watched the film. The picture appears for only a second or two when the Rabbit-ears TV set tries desperately to capture the attention of the Master and his girlfriend. The man in the box rips several photos out of a filing cabinet while ranting about how amazing the junkyard is for used appliances. One of his photos (the one on the top of the stack) features a nude woman with star-shaped pasties over her nipples. In more recent editions, a bikini or bra was added to the photograph. 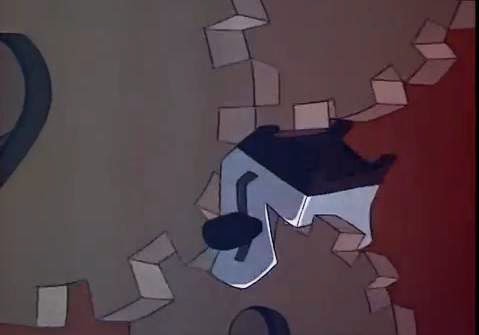 Sacrifice. In the end of the film, the Master finds himself on a collision-course with the scrap machine that previously spent an entire scene crushing terrified automobiles. He’s trapped, and a crushing seems inevitable until Toaster throws itself into the crusher’s gears in order to save him. It is smashed and twisted between the gears, but ultimately stops the machine and saves the Master, seemingly at the cost of its own life.

Do you have a favorite novel that you’d love to see adapted into another medium, or know of any that have already received adaptations? Leave a shout-out in the comments! You can also connect on Twitter at @Popliterary, or send a message on the “contact” page.

4 thoughts on “Pop Culture Based on Novels Part 4: The Brave Little Toaster”

I made more progress on my year-long reading challenges in March. So far, I'm still letting my usual somewhat random book selection habits guide my progress in these challenges. I do have a Z book planned for the #2021AToZReadingChallenge, but that's the extent of my planning. No bingo yet for the #LGBTQBookBingo2021, but maybe April will be the month I get one of those!
Bill explores many topics, from climate change and the incredible design that went into the Mars rover's landing equipment to his start as an educational entertainer and changing one's mind about topics (like GMOs) when new evidence is presented. I thoroughly enjoyed this book both as a nerd and as a fan of Bill's work. It's also fun listening to the audiobook because Bill narrates it.
Today is the international transgender day of visibility. We celebrate trans and nonbinary people today, both those who can openly live themselves and those who cannot. Here is a collection of great books by trans authors!
In the face of the recent increase in hate crimes and discrimination against the AAPI community over the past year, here are 10 excellent queer AAPI authors to check out!