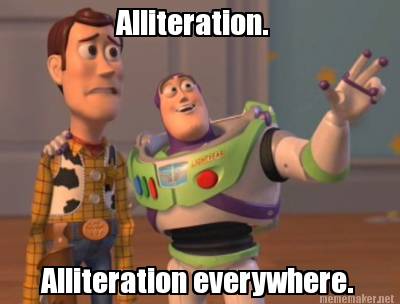 Can you name any of these characters? 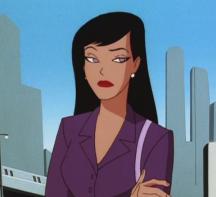 Skillfully utilized literary devices work their magic and capture your attention without you even realizing what’s happening. You don’t even need to know the first thing about a literary device for it to do its job. Advertisers and creators know this and take advantage of it whenever the opportunity arises. If you can name any of these cartoon characters, you have been influenced by three tricky little devices: alliteration, consonance, and assonance.

Understanding this trio isn’t essential, but it gives you a handle on the ways that people craft their works, giving you a new layer of enjoyment and appreciation for the stories (and songs!) you love. Cartoon fans might know that any cartoon with catchy songs likely utilizes this trio. And if you’re a V for Vendetta fan, becoming familiar with these three devices gives you some cool insight into V as a character.

First of all, let’s get to know these sound devices better with a quick look at their definitions.

Alliteration: The repetition of consonant sounds at the beginning of closely grouped words, or at the beginning of syllables. The part about syllables can trip people up on English class tests, but this nuance doesn’t matter much for people who casually enjoy looking at the bones of what makes creative works really shine.

Consonance: The repetition of consonant sounds in closely grouped words (not only at the beginning of words or syllables, but also in the middle and at the end).

Assonance: The repetition of vowel sounds in closely grouped words

These three devices are used to:

They often appear in poems, songs, and plays (especially Shakespeare), but are not limited to these three genres. Novelists, filmmakers, animators, comic artists, and even commercial writers make use of them. You probably know a few titles that utilize these literary devices to give their creation a more memorable name:

A Universe of Songs

To start us off, let’s take a look at how these sounds enhance songs. I’ve selected two from one of my favorite cartoons, Steven Universe, as our model.

First up is the show’s catchy theme song. I’ve highlighted clusters of similar sounds to make them more visible, but did not highlight all examples.

We are the Crystal Gems
We’ll always save the day
And if you think we can’t
We’ll always find a way
That’s why the people of this world believe in
Garnet, Amethyst, and Pearl and Steven!

Our literary trio help make this song flow and gives it great musicality.

Now for the “a” sounds. We have the repetition of two different sounds, a short “a” and a long one. These are both examples of assonance.

The theme even manages to work in some consonance. We have the repetition of that hard “t” in the last line, disrupted only by Pearl’s name. This disruption actually serves to call attention to the last line and make the close with Steven’s name even more impactful. It’s almost like Steven makes everything complete.

As a result of this excellent use of clustered sounds, the song sounds smooth, lyrical, and catchy.

Just When You Thought it was Over

I’ve included a second Steven Universe song so that you can take another look at these literary devices. Again, I did not highlight all examples.

I was fine when you came
And we fought like it was all some silly game
Over her, who she’d choose
After all those years I never thought I’d lose

(Although there are a lot of repeated sounds in the first four lines of this stanza, they are not generally counted as a sound device because they are just the same words used over and over.)

War and glory, reinvention
Fusion, freedom, her attention
Out in daylight my potential
Bold, precise, experimental
(Take a look at the underlined sounds in this stanza. These are not consonance or assonance. Although they are the repetition of similar sounds close together, these particular examples are rhymes. They aren’t just similar, they are identical!)

Who am I now in this world without her?

Petty and dull with the nerve to doubt her
What does it matter? It’s already done
Now I’ve got to be there for her son

Sound devices enhance this song, giving it the flow and feel appropriate to this impactful scene.

Keep in mind that consonance, alliteration, and assonance can be used for purposes other than improving the flow and rhythm of songs and poems. Fans of V for Vendetta are familiar with the impact that these three literary devices can have on speech.

V makes his first appearance with a lofty speech meant to be intimidating and memorable. His lyrical soliloquy flows rapidly, giving those around him the impression of a madman and actor. A careful listener might notice that V uses alliteration, consonance, and assonance throughout, becoming more and more apparent toward the end as he dissolves into a violent volley of vicious ‘v’ sounds. Understanding the crafting of this introduction gives audience members a powerful look at the man’s character.

The first is just how theatrical his plans are, and how much time and effort he puts into them. The man sees himself as an actor, and spends careful time writing and memorizing his opening lines. Throughout the history of theater and literature, actors and poets have used these three devices to memorize their lines more quickly. The repetitive sound and resulting rapid flow make memorization and recital much easier. V wants to be able to learn numerous lines for his performance, and crafts them accordingly. As an added bonus, being able to speak his lines so rapidly adds to the menacing nature of his affected persona.

As a bonus, we can further infer that the theatrical quality of his plan might reflect how V feels about the situation. He sees this whole plot as a play, meaning that he might not fully register the reality of the situation. It is also possible that turning it all into a play allows him to disassociate the event from reality in order to follow through effectively.

What we learn from his opening act doesn’t stop with being well prepared or turning the event into a play. His plans go much deeper. He understands the impact of a strong opening. He knows that he must hook his audience right away in order to have the optimum impact. Copious abuse of the sound trio creates a memorable opening act for him that serves to intimidate his startled audience.

We also gain a deeper understanding of V’s purpose. V carefully populates his opening dialogue with these literary devices in order to shape his words into memorable masterpieces. The repetition of sounds gives words a stronger impact, making them more likely to stick in the listener’s mind. And memorability is exactly what this masked man aims for. He wants people to remember the tragic events that inspire his actions. He wants them to remember the fifth of November and never forget again.

In the comic, V uses alliteration, consonance, and assonance more frequently than in the film. Readers know that when these sound clusters appear, they need to pay close attention to what comes next. It usually signals pivotal plot points.

Do you have a favorite example of alliteration, assonance, or consonance in pop culture? Share it in the comments! You can also connect on Twitter at @Popliterary, or send a message on the “contact me” page.

It's almost #PrideMonth, so I figured I would share this year's #LGBTQBookBingo card in case anyone who isn't currently participating wants to do a fun queer bingo in June! This bingo is year-long, but feel free to just do it for June! (It's also on #TheStoryGraph)
I decided that my The Brilliant Death jar will hold looseleaf tea alongside one of @rainbowcratebookbox 's lovely tea tins from another month. I enjoyed this book, and the design on this jar is lovely!
Bookmarks allow us to put a pause on whatever story we're immersed in so that we can step into and out of our lives seamlessly. The metal bookmark from the March @rainbowcratebookbox is charming, and packed full of reading suggestions! (granted, I need a magnefying glass to read it and my eyes aren't too bad) There's something satisfying about placing the weight of a metal bookmark into your most recent pause.
I wanted to show off the March magnet from @rainbowcratebookbox ! So far, this is one of my favorite of their magnets (and I haven't read this book). I love the sparkly semi-transparent edges of it quite a lot.