Pride Month offers time for celebrating the vast diversity that makes up the LGBTQ+ community, as well as paying homage to those who cannot live as themselves for fear of oppression, violence, and rejection. In honor of Pride, I wanted to continue this miniseries recognizing creative works that increase LGBTQ+ visibility in the media. I tried to choose works that provide positive examples for our community. My goal is not to applaud every work that increases LGBTQ+ visibility (that would make for a very long miniseries!), but to recognize several prominent ones that feature positive portrayals of LGBTQ+ individuals.

Without further ado, I welcome you to part two. If you missed it, check out part 1 here!

(There are a few minor spoilers in this section. I wanted to be fair and give you, dear reader, the option to skip over these just in case such things might ruin the experience for you. Steven Universe is a fun show, and I do not wish to hold responsibility for lowering someone’s enjoyment of a first watching.)

Rebecca Sugar’s imaginative series Steven Universe has received abundant praise for taking on topics that cartoons typically avoid. From discussing many forms of nontraditional families to dealing with the complicated emotions of losing a parent you never knew, this cartoon hits hard. It has also endeavored to increase LGBTQ+ visibility in multiple ways.

The show features multiple same-sex relationships featuring lesbian characters. The first revealed are the gems Ruby and Sapphire, who discover a deep love for one another that leads to a powerful fusion. In their distant past, the Gem homeworld had never seen such a relationship before and rejected the couple immediately.

The second comes in later, through heavy implication: Pearl loved Steven’s mom Rose Quartz. Though the words “I love Rose” never come into play, viewers can piece this information together from several scenes in which we see an intense rivalry between young Greg Universe and Pearl in situations involving Rose. It quickly becomes clear that the two competed for her love in the past. We even get a heart wrenching musical number in the episode “Mr. Greg” in which Pearl recounts her undying devotion to Rose and concedes that Greg won in the end. She, however, can’t seem to move on and continues to love the ethereal woman deeply.

But wait, there’s more! Steven Universe also gives us a character with no distinct gender: Stevonni, the result of an accidental fusion between Connie and Steven. Stevonni has long hair and wears gender-neutral clothing that is a combination of Steven and Connie’s attire. Other characters even refer to them as “they” in this form, while all other fusions receive female pronouns. Other characters never seem baffled by Stevonni, never feeling the need to define them as one gender or the other.

Webcomics, a less-often recognized facet of the abundant world of media, offer a delightful way to discover new artists crafting their passions through the internet. One of my favorite webcomics right now is Avialae, a comic about a teenage boy coping with the life-changing impact of suddenly growing a set of beautiful wings. The comic ventures into the sexually explicit on occasion, and thus is not suited to all audiences. For the appropriate audience, the comic does a great job of exploring relationships, living with tough secrets, and discovering your sexuality. The comic explores developing gay relationships, as well as introducing demisexuality, bringing the word and its accompanying meaning into the lexicon of its readers.

When people discuss relationships, they often only talk about those involving two individuals. Other relationship types often get left out of the conversation unless discussed in a negative light. This extends to pop culture as well. I don’t know many creative works that feature positive portrayals of anybody intimately involved with more than one person (if you have any favorite examples, please share them in the comments!). Enter Kimchi Cuddles, the webcomic that the LGBTQ+ community didn’t know it was missing. 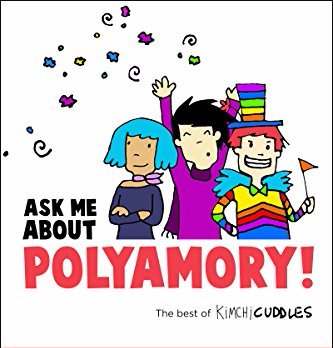 Kimchi Cuddles uses its quirky, charming, and adorable characters to portray relationships and identities of all types with the purpose of making nontraditional relationships more visible. The comics place the most emphasis on polyamory, but discusses many other orientations and identities along the way. In 2016, the webcomic made its way into print with the book Ask Me About Polyamory!, containing a collection of some of artist and creator Tikva Wolf’s best pages from Kimchi Cuddles.

Anybody looking for a cartoon with a lot of heart, silly family shenanigans, a ton of mischief, and copious amounts of food-based puns might find what they’re looking for in Bob’s Burgers. The series follows Bob and his family as they work to find balance between owning a struggling hamburger shop and taking care of three middle school-aged children. Each character has a unique, quirky personality that somehow meshes perfectly with all of the other quirky people they interact with.

Bob’s Burgers features several LGBTQ+ characters, one of which is part of the main cast: Bob Belcher. The burger-flipping protagonist has been put in multiple situations where he expresses interest in men. Dialogue expressly stating that he is anything other than heterosexual has yet to appear, but fans can infer based on scenes and dialogue throughout. One such moment occurs in the episode “Turkey in the Can“, when Bob tells a deli clerk that he is straight, and quickly revises the statement to mostly straight. In addition to Bob, we see side characters such as Marshmallow, Cha-Cha, Marbles, Glitter, and, according to Bob’s wife Linda, Little King Trashmouth (a raccoon that Linda enjoys observing from her window and creating an imaginative narrative about).

I’ll wrap this list up here. Keep an eye out for the next part in this series, coming your way soon!

Do you have a favorite game, show, comic, or movie with LGBTQ+ characters or themes that didn’t make the list? Please share them in the comments! You can also connect on Twitter at @Popliterary, or send a message on the “contact me” page. And remember to keep an eye out later this month for posts containing more titles that bring visibility to the LGBTQ+ community!